Paris may have its Eiffel Tower and Rome its Colosseum, but Budapest has the Chain Bridge. Beloved by Hungarians, the Chain Bridge (Lánchid) is the pride of the city. What many don’t realize – even some Hungarians – is that steps from this national treasure works a man who has devoted his life to it. His name is János Fazekas, and he is the Bridge Master of Budapest.

Tucked away at the end of the Clark Adam Tunnel stands an old door. It’s easy to miss. Behind it, Mr. Fazekas works alone in his office. Recently, I met him there for an interview. After greeting me with a warm smile and a strong handshake, Mr. Fazekas pointed out faded blueprints of the bridge hanging on the walls and an old fee schedule. Up until 1947, he explained, people paid toll to cross. The Bridge Master’s old oak desk sits under a window where he can keep an eye on his Lánchid. After the two of us took our seats, Mr. Fazekas smiled as he shared an album of bridge photos. He reminded me of a proud parent showing snapshots of his child.

It’s clear that you are passionate about the bridge. Why so?
„I love its proportion. It’s a perfect bridge. Another reason is that I inherited it from my dad. Not many people inherit such a beautiful thing from their father.”

How does it feel to be Master of such a famous bridge?
„Well, I don’t want to offend the other Bridge Masters, but I’m proud that I have the most beautiful bridge in Budapest. Most of the others are for transportation. This one is poetry.” 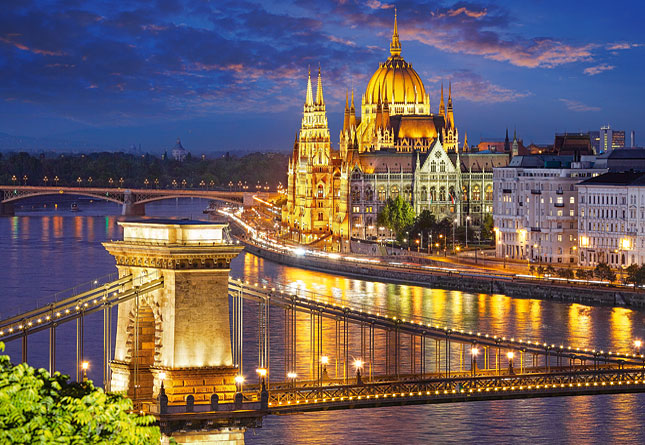 What is a typical day like for a Bridge Master?
„Some people think I sit here all day in my office, but I’m out on the bridge. Each day, I walk the bridge two times – once in the morning and again in the afternoon. I look to make sure that everything is safe, that no accidents can happen. I’m like a walking camera. Every few months, I have to do regular check-ups of the surface and other parts. I also work closely with the engineers. A couple of times a year, I walk the chains. I also take people up to the top: photographers, architects, television and film crews.” Mr. Fazekas smiled. „Even when I’m away on holiday – if I’m on a bridge, I check to see if it’s safe. I can’t help it.”

Is it a dangerous job?
„It can be. You can only walk the chains when the weather is nice. It can be very slippery if it’s raining. Before I go up, I have to notify the fire and police departments. Otherwise, they’ll think I’m trying to commit suicide and jump off. Once the Bridge Master on the Elizabeth Bridge forgot to call in when he took up a photographer. When they were climbing to the top, they noticed that there was no traffic. All of a sudden, a fire truck came, and the basket started to go up. My colleague shouted that he was the Bridge Master, and the firefighter responded, ‘Everyone says that.’”

What are some of your most memorable bridge moments?
„Years ago a helicopter put a piano on one of the towers, and a pianist played. That was exciting. Once they filmed a helicopter chase scene for a movie around the bridge towers. That was also thrilling to watch. When they have the Red Bull Airshows, the planes fly over and under the bridge, but I have to cover my eyes for those. I’m scared they’ll hit it.”

Will your son continue on as Bridge Master?
„He’s not thinking of it. He wants to be a rock musician and is studying to be a stuntman.” Mr. Fazekas tossed me a smirk. „But I handed in his CV just in case he changes his mind.”